School funding is complex in every state, but arguably more so in Colorado than anywhere else. Why? Because a tangle of state constitutional amendments adopted over the past few decades interact with and conflict with one another in ways that no one foresaw. It doesn’t help that our school finance law was last updated in 1994.

So, we’re breaking down the basics of school funding in the Centennial State.

How Schools are Funded in Colorado 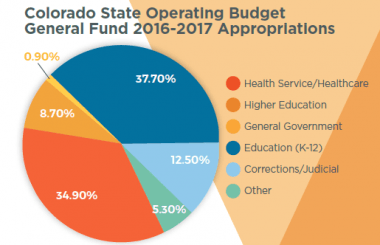 In theory, any school district should be funded by relatively equal shares from state and local sources, with additional resources for students who need it most.

In reality, though, the state has taken on an increasingly large share over the years, thanks to property tax cuts mandated by the Gallagher Amendment (explained below). Currently, almost two-thirds of school funding in Colorado comes from the state, and just over a third from local property taxes.

The imbalance varies from district to district. School districts where property values are high fund a somewhat higher share of their budgets from local sources than less affluent districts. Douglas County, for example, generates 34 percent of its revenue from local property taxes, while the much lower-income Mapleton district in Adams County picks up just 24 percent of its school funding tab.

Not every district gets the same amount of money per-student. Our state’s current school funding formula distributes funds based on many factors, most prevalent among them: 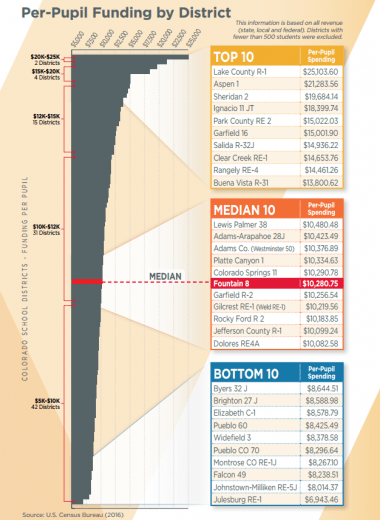 The effects of this funding formula can be seen in this per-pupil funding graphic. On average, Colorado school districts spend roughly $10,200 per student annually. But this varies dramatically on either end of the funding spectrum. On one end, Lake County School District spends more than $25,000 per pupil. On the other end, Julesburg School District spends $6,943 per student.

The following four issues double down on the complexity:

Thankfully, efforts are underway to update how the state funds schools and address the inequities in the current system. A recently-launched interim legislative committee will start meeting over the summer to study Colorado’s school finance formula with the goal of making changes in the 2018 and 2019 legislative session. Representative Alec Garnett (D) will serve as the Chair and Senator Owen Hill (R) will serve as the Vice Chair. The first meeting is scheduled for late July 2017.

Colorado Succeeds continues to push policymakers to adopt a system where:

Colorado should fund kids, not systems. We’ll keep pushing the state until it does so.