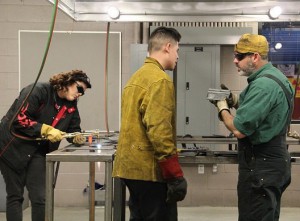 Colorado Succeeds has long believed in and advocated for the importance of students continuing their education beyond high school. This doesn’t mean every student must attend a four-year college, or even attain a two-year degree. But at the very least every high school graduate needs some form of relevant and targeted training or certification for greater career opportunities and mobility into the middle class and beyond.

Having students continue their education post-high school also benefits Colorado businesses, which increasingly need workers with higher levels of training and education to meet the demands of the 21st century workplace.

Another, by the Thomas Fordham Institute, finds that Career and Technical Education (CTE) boosts graduation rate, increases the likelihood that students will go on to college, and provides the greatest boost to kids who need it most – low-income students, and boys in particular.

The third study, by Gallup and USA Funds, finds that as a whole, people who hold associate degrees find their work meaningful and related to their field of study. It also finds, however, that on most measures of well-being, associate degree-holders lag behind people with bachelor’s degrees.

An Opportunity for All

The Lumina study is the meatiest of the three, and contains some encouraging, Colorado-specific data. Combining degree attainment (associate degree or higher) with people who hold a high-quality postsecondary certificates, 54.2 percent of Coloradans hold some type of postsecondary credential.

“…the recipe for 21st century success is far more complex than it used to be, and the need for talent — all kinds of talent — is greater than ever. This means we need to find new ways to develop our nation’s talent to assure all Americans have the opportunity to create a better future.

The vital step in meeting this exploding demand for talent…is to significantly increase postsecondary attainment rates, especially among students who represent our future as a nation: non-white students, working adults, first-generation students and low-income students.”

Unfortunately, Colorado still has some distance to travel before we meet this last goal. According to the Lumina report, Colorado’s low-income students of color still lag far behind in postsecondary attainment. Just 20 percent of Hispanics in Colorado and 34 percent of African Americans hold an associate degree or higher. By contrast, 59 percent of Asians and 55 percent of whites hold degrees.

The reasons these numbers matter have become increasingly apparent as Colorado (and the nation’s) economy continues transitioning into the 21st century. In just four short years, 74 percent of Colorado jobs will require a postsecondary education. Unless the state significantly increases its postsecondary attainment rate, Colorado employers will continue to depend on importing up to 50 percent of qualified workers, costing them more than $19 million annually.

Fordham’s study focuses on the benefits of Career and Technical Education (CTE), and provides an excellent description of the new directions CTE has taken:

“No longer isolated “shop” classes for students showing little future promise, CTE coursework is now strategic and sequenced. It entails skill building for careers in fields like information technology, health sciences, and advanced manufacturing. Secondary CTE is meant to be a coherent pathway, started in high school, into authentic technical education options, and credentials, at the postsecondary level.”

The Fordham study focuses on Arkansas, as it recently overhauled its policies to improve career readiness and align CTE programs with the labor market. According to the study, since 2014 89 percent of Arkansas high school students have taken at least one CTE course, and 70 percent took at least three!

Further, students who “concentrated,” or took three or more courses in a coordinated field of study, are 21 percentage points more likely to graduate than otherwise identical students who do not concentrate. And boys and minority students see the greatest benefit from participating in CTE classes and concentrations.

Importantly, the study finds that high-achieving students in Arkansas weren’t steered away from CTE courses. This is significant because in CTE’s previous incarnation, often called vocational education, students deemed less capable were tracked into CTE classes. As Fordham states, this tracking sent many low-income and minority students in particular into “low-paying, menial jobs.” This also gave the entire field a stigma, causing college-bound students to avoid the classes.

Although Colorado hasn’t gone as far as Arkansas in promoting and expanding CTE, some school districts in Colorado are putting a renewed emphasis on career-focused coursework, which afford students opportunities to acquire industry certificates or credits toward associate degrees while in high school.

This has been a major area of focus for Colorado Succeeds for the past nine years. Most recently, we have championed legislation that would significantly boost CTE in Colorado. The bill, House Bill 1289, would provide $1,000 in bonus funding to districts for each high school student who successfully completes an industry certification linked to high demand jobs, finishes a rigorous postsecondary training program tied to key industry needs, or successfully completes a Computer Science Advanced Placement (AP) course. Similar policies in other states have seen incredible success, with underserved student groups such as rural students and students living in poverty seeing the greatest gains.

The bill passed both the House and Senate education committees and continues to make its way through the legislature.

We are also working with our business, education, and government partners to bring aspects of the successful Swiss apprenticeship model to Colorado. The Swiss system is considered the international gold standard for career-focused education – producing job-ready students with relevant skills and a pool of qualified workers for employers.

The Gallup study finds that associate degrees need not be viewed as a second-rate option for people who, for whatever reason, do not pursue a bachelor’s degree. While those with associate degrees are less likely to have “good jobs,” they are just as likely to strongly agree that their education was worth the cost.

This study points to the importance of stackable credentials, a sequence of credentials that can be accumulated over time to build up an individual’s qualifications and help them to move along a career pathway or up a career ladder to different and potentially higher-paying jobs.

It also illustrates the need to ensure that as the number and range of middle-skill jobs increase in Colorado, that workers have career tracks that promise the possibility of advancement and contentment in the workplace.

Taken together, these studies reinforce our belief that Colorado Succeeds is pursuing the right agenda: promoting policies and practices to help ensure that Colorado schools offer an equitable opportunity to all students to find a sustainable career path for the 21st century workforce. This, in turn, will help our businesses have the talented and innovative homegrown workforce they need.

What you need to know: the 2022 Talent Pipeline Reoprt

ForceNow is Developing the Next Generation of Cybersecurity Experts