This is the second in a series of blog posts from Colorado Succeeds examining Colorado school achievement data and student socioeconomic status. Our intent is to share this data in an informative and useful way – and to help spur conversation about the importance of student achievement for all Colorado students. Click here for Part 1.

Colorado Succeeds’ analysis of Colorado school performance finds many schools across the state are reaching their students – no matter the student’s background or zip code. However exciting and positive these results are, it also means that many other schools could be doing more to prepare their students for college and career success.

The first chart below displays school performance and affluence of every school in Colorado. As you can see, affluent schools tend to perform better. But the chart also clearly shows that there are examples of success across the spectrum. Particularly interesting are the schools in the top left quadrant, which are high-performing, low-income schools. These schools are shining examples of what is possible, shattering the stereotype that a student’s demographics determine their destiny. An upcoming post in this series will dive deeper into the common characteristics of these positive “outliers,” uncovering what makes them so special. 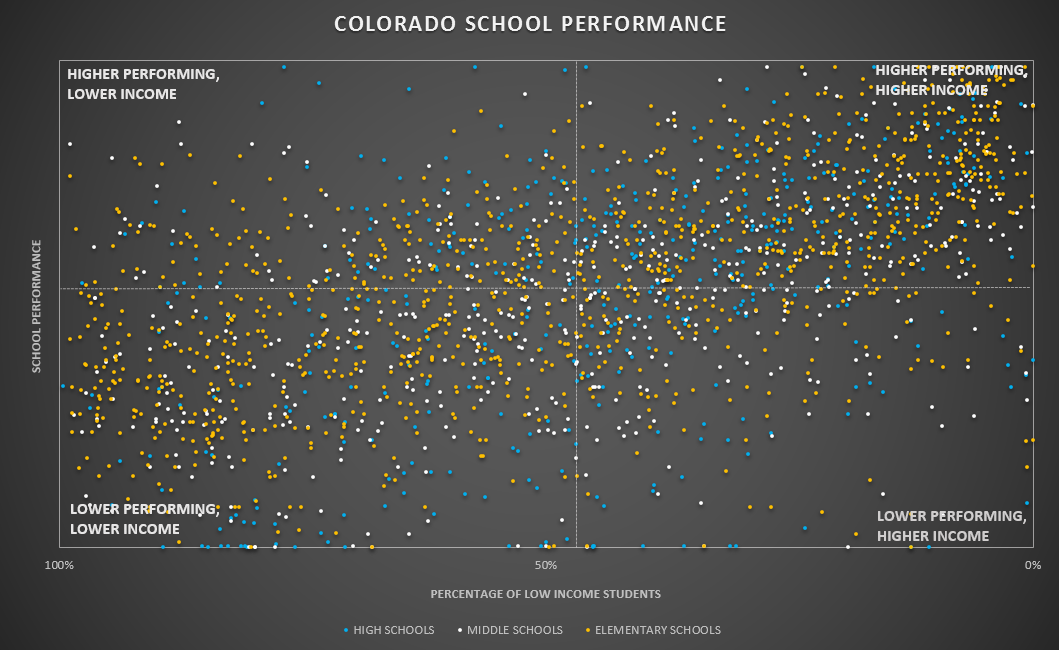 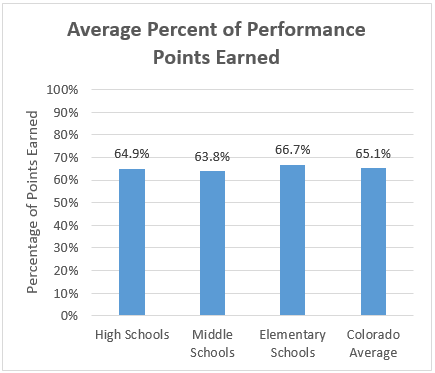 During the 2013-2014 school year, Colorado high schools received, on average, 65 percent of the performance points available on the Colorado Department of Education’s School Performance Framework. In other words, Colorado public high schools are, on average, earning a “Meets” state expectations rating – schools that receive between 62.5 percent to 87.5 percent of the performance points available earn a “Meets” rating. This average demonstrates the need to look at school performance in a more precise manner. By using school specific data, and looking at a school’s student makeup, we are better able to see the nuances that exist between schools and districts sitting within the “Meets” rating boundaries.

From the “All Colorado Public High Schools” scatterplot we can see, more accurately, that the average high school earns a “Meets” rating, but is really only a few percentage points above the boundary line separating a “Meets” rating from an “Approaching” rating. We can also see that the schools that exist within this boundary vary greatly in terms of their performance and student population. Recognizing these nuances aids parents, educators, and policymakers in better understanding not only a school’s performance and support needs but also the overall Colorado school landscape.

The same can be said about middle school and elementary school performance. Colorado’s middle schools received, on average, 63.8 percent of the performance points available in the 2013-2014 school year, and Colorado’s elementary schools, 66.7 percent. All school levels receive, on average, a “Meets” state expectations rating. However, by looking more closely at the data, we see they are all earning on the lower end of the ratings margin and, as with the high school data, the schools that exist within this rating vary greatly. 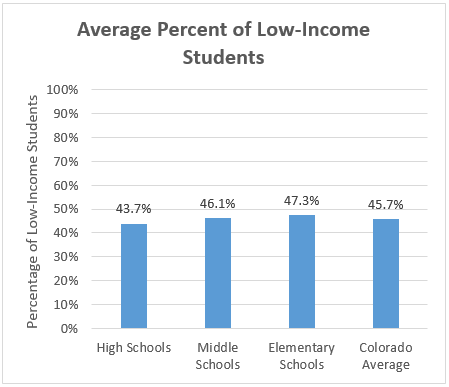 While the numbers aren’t vastly different, the number of low income students at the elementary level is a couple percentage points above the high school level and just slightly above the middle school level. This change between elementary, middle and high school might come as a result of dropout rates, which are higher for students coming from low income background – an issue for another post.

In general, students coming from low income families perform worse than their more affluent counter parts. This also means schools with higher populations of low income students therefore do not perform as well as schools in wealthy districts. One of the first things to notice about the scatterplots for each school level is that the results in each are less predictable than one might have thought; there is quite a bit of variation across all schools and even across schools with similar student populations. This variation highlights a major problem in our current rating system, which clusters schools into only four categories. It is apparent however that school performance is much more nuanced than these categories can demonstrate. This was a major reason Colorado Succeeds helped launch ColoradoSchoolGrades.com in 2010.

One noticeable trend is that affluent schools are likely to cluster at the higher performance categories, but the non-affluent schools are not as likely to cluster at the low performance groupings. The schools in the upper right corner of the graph are much more closely clustered than the schools on the upper and even lower left of the graph. This is promising data, as it shows that schools with greater percentages of historically disadvantaged students can, in fact, successfully serve their students – these schools are not predestined to fail.

Another obvious trend in the graphs shows that many of the schools seen in the upper left of the graph – those schools with a high percentage of students living in low-income families and with significant positive performance numbers – are public charter schools. These numbers demonstrate one of the main reasons why Colorado Succeeds strongly advocates for and supports family and student access to choice and innovation when it comes to education. These schools are excellent examples of schools that are breaking the mold of what’s expected and shining. We believe that school choice offers an opportunity for all of Colorado’s students to have access to a high quality education.

The scatterplots also point to a number of high performing schools, schools that are successfully serving their student populations no matter what the makeup of the school’s population or where these schools are located. We have identified these top performers and are working to learn what it is that sets these schools apart. An in-depth look at these top performers will come in a following post.

The accomplished schools shown in this data demonstrate that successfully serving all student populations is possible. Colorado Succeeds firmly believes that our accountability system – coupling data analysis with supports and intervention – can be used to realize this goal. While we are optimistic about the information provided by this data, we realize there is still a great deal of work to be done. We know that having access to a high quality education can change outcomes and the trajectory of a student’s life – and Colorado Succeeds will continue to advocate for the necessary policies to ensure schools and kids can thrive.