The 2016 Colorado legislature has been dubbed the “do-nothing session” by various media outlets. While the session closed with important work left unaccomplished, major progress was made on several important education issues. In fact, the majority of our policy priorities will become law.

We hosted a recap of the session for our members on May 24 at the Governor’s Mansion with Senate Education Committee Chairman Owen Hill, a Colorado Springs Republican, and committee member Mike Johnston, a Denver Democrat. They provided nearly 100 business leaders with their frank analysis of the session’s high and low points from an education perspective.

The following is a brief synopsis of the major legislative wins and a look at the candid conversation between two key policy makers and Colorado Succeeds members.

Johnston and Hill gave an inside look into their collaboration across the aisle in securing key charter victories, explaining that it took a full year of planning to get the aggressive charter school agenda written, introduced, and passed. 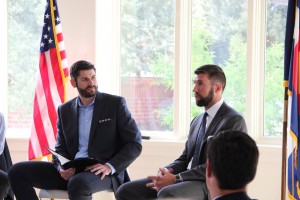 orado Succeeds worked closely with partners in the charter and education reform sectors on several pieces of legislation, aimed at leveling the playing field for public charter school students. These policy changes cover a variety of technical adjustments, that taken together, will greatly ease unnecessary operating demands currently placed on charter schools while simultaneously improving school quality. For a full recap of all nine charter provisions we helped pass, check out our legislative recap fact sheet.

The one component of the charter bills that died during this legislative session was arguably the most controversial: it would have required school districts to share equally mill levy override (voter-approved local property tax increases for education) funds with charter schools. Currently, districts can choose how much to share with local charter schools. While some districts, such as Denver and Boulder share equally or almost equally, many do not.

The charter funding equality campaign won widespread support in the community and in the media. This issue will certainly be back in front of the legislature in future years.

Hill and Johnson shared their perspective on why some of the workforce legislation passed, while other pieces did not, even though the workforce agenda entered the legislative session with bipartisan support. They both agreed that extremes in their parties are pulling the education debates in the wrong direction.

“There’s a lot of emotion behind the far left and far right alliance, there’s not a whole lot of fact. Colorado Succeeds helps push out facts and policies and strong ideas,” said Hill. “I’m still a firm believer that seven times out of ten, fact and logic and truth wins out over emotion. So we’ve got to stay the course. We’ve got to put in the work. “

“My belief is there are 800,000 kids in Colorado which makes, with their two parents, my army 1.6 million,” Johnston noted.  “The question is only, can you mobilize and engage those voices to speak up? Which is why the moments that have felt most alone in the capitol have never felt alone to me because I knew that the folks in this room are generally on your side.”

The Future for Colorado 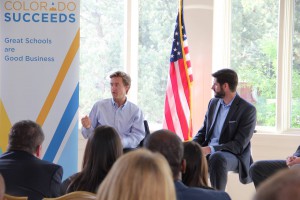 Both senators spoke of the importance for the business community to stay involved in the challenges facing Colorado, especially given upcoming elections and the recent departure of Colorado’s Education Commissioner, Rich Crandall, and the passage of the Every Student Succeeds Act, which puts more control back on to the states.

“At the end of the day, what we need to move forward in so many cases is competent people who have that focus on achieving progress towards our goals. I think that’s one of the most important characteristics I realized after being at this for four years and what I look for in finding other partners to get things done. Thank you for all investing so much in that pragmatic view of what politics should be,” Hill thanked the business leaders in the room.

Hill and Owen closed the night debating the role of the future Commissioner and the potential to restructure the board governance model for Colorado education. Whatever the outcome, both agreed, the role of business and civic leaders has never been more important.

“Can we rebuild this idea of a representative democracy? I think we can. One legislator at a time. One evening cocktail reception at a time… That’s where I put the onus back on you and back on a bunch of other folks… be a part of the process, it’s actually a lot of fun,” said Hill.

Johnston concurred, “This is why I think the opportunity for Colorado Succeeds is so dramatic. To say, not just any civilians, but the greatest civic leaders of this state are actually there with us on these issues that matter. That’s how you give folks the courage to keep fighting.”

Full Circle: The Story of Two Families and The Succeeds Prize