A group of 50 delegates from Colorado and Washington D.C. traveled to Zurich, Switzerland during the first week of February 2016 to gain insight from the successful Swiss dual system apprenticeship program known as Swiss Federal Institute for Vocational Education and Training (SFIVET).

The goal of this educational trip was to expose Colorado educators, government officials, local nonprofits and industry leaders to the proven Swiss model for apprenticeships.

In the Swiss program, 66% to 75% of all primary school graduates enter into apprenticeships between the ages of 15 – 17. Switzerland has 250 defined occupations and unique apprenticeships in both the trade and professional fields. Between 30% – 40% of all Swiss businesses (nearly 13,000 companies) participate in sponsoring apprentices. The apprenticeships are between two to four years in length, based upon which program is selected. In general, apprentices work at a company three to four days per week and are in the classroom one to two days per week, depending on the program in which a student is enrolled. Currently, there are over 220,000 apprentices (2.75% of population) in the Swiss system within a total population of around 8,000,000 people.

Under the Swiss system there are three different types of apprenticeship programs:

The success of the apprenticeship culture in Switzerland comes from some key changes that were made starting 20 years ago. The Swiss changed over 300 pieces of legislation over the past 20 years and built a new system of permeable education. Apprentices now have the ability, with on and off ramps, to build an education with clear lines to university, if they desire. The Colorado delegation visited many highly successful companies where the CEO’s boasted of starting out as apprentices and working their way up through the organization, often attending university following their apprenticeship. If Swiss students want to attend university after their apprenticeships, the apprenticeship programs help them to build credits towards a degree, which is a route that is much respected in the Swiss system.

Apprentices are treated as “talent,” as well as the future of the Swiss economy, and as a way to sustain their many industries and technical trades. Swiss unemployment for the 16-24 age group is less than 3.5%.
Unemployment rates from the U.S. BLS for January 2016 for ages 16-24 are detailed below:

Apprenticeships generally cost around 8,000 CHF (Swiss Franc – currently 1 CHF = $0.98) per year, including wages this can be over a 100,000 CHF investment from employers for apprentices. Apprenticeships are open to all citizens and free if the individual has lived continuously in Switzerland for the preceding two years. For anyone that is not Swiss, participation in the program is available for 50,000 CHF. Apprentices are expected to take a wage at around 25% of a typical salary. Most salaries range in the 700-1,000 CHF per month. However, since the average age to start apprenticeships is 16 years old, the students commonly live at home or are subsidized to live near their company and leave the education system with no debt and virtually guaranteed employment.

The Swiss government does predictive economic forecasting to determine how many apprentices should be in each career path or trade segment. The economic forecasting helps level out economic downturns and keep employment levels very high with the right amount of graduating apprentices gaining direct employment upon completion. Additionally, there is a national apprenticeship marketplace where all employers post openings and provides a dashboard of labor needs for the next five years.

Many of the apprentice programs in Switzerland are held to a higher standard than their counterparts in the United States. In one hospitality school we visited, Schweizerische Hotelfachschule Luzern, students must maintain a 4.5 out of 6.0 grade average over a three-semester period or they are dismissed from the program. If an apprentice drops below a 4.0, they are also kicked out of the program.

What Does This Mean for Colorado – and for RK?

Being part of this delegation invigorated me and Rick Kinning, Chairman | CEO of RK, to invest in rebuilding our apprenticeship program and double our enrollment. RK will be soliciting a very large class of first-year apprentices to help drive our future workforce and growth. We will be asking our company leaders to select these future apprentices and commit to their growth and development. 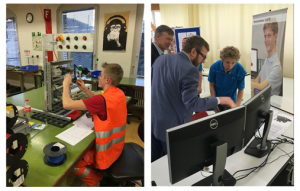 Currently, RK is working with MSU Denver to build a Bachelor’s of Construction Technology and a Bachelor’s of Manufacturing Technology. Both will be four-year programs and the students will be granted credits for a good portion of the first two years of the program following completion of an accredited apprenticeship program. Our goal is to weave college classes into the program to help our apprentices graduate our program with 60 credit hours of the 120 credit hours required for a bachelor’s Degree. Currently, we do not charge our students for our apprenticeship program, so in essence, an RK graduate could enter a bachelor’s degree program with no student debt and 60 credit hours completed. This initiative will fall under RK’s Human Resources department and our entire company will be fully committed to its success.

For more information about RK’s plans to evolve its current RK Apprenticeship Program, click here. To learn why Switzerland matters, why their model is working, and what Colorado business leaders are doing to bring the best practices home to Colorado, click here for commentary by Scott Laband.

Community of Practice on Work-Based Learning