One of the most comprehensive analyses ever undertaken of test score data from across the nation lays bare yawning achievement gaps between rich and poor students, as well as white students and students of color.

While this may not come as a huge surprise, given attention focused on the achievement gap in recent years, the sheer scope of the Stanford University study adds weight to arguments that racial and socioeconomic school segregation are exacerbating educational inequities that threaten our economic well-being.

Stanford researchers surveyed data from roughly 200 million standardized math and reading tests taken between 2009 and 2012 in all 50 states. One jaw-dropping statistic: They found that sixth graders in the nation’s wealthiest and poorest school districts are four grade levels apart as measured by test scores.

Before diving into the findings and our takeaways, it’s important to note that there are schools in Colorado breaking this mold. Indeed, some schools, including Rocky Mountain Prep (RMP), the Denver School of Science and Technology (DSST), and KIPP have strong records of producing high-achieving students in some of Denver’s lowest income neighborhoods. For example, at Rocky Mountain Prep, roughly 85 percent of students qualify for free and reduced lunch – the federal measure of poverty. Yet RMP boasted some of the highest PARCC scores in Denver Public Schools in 2015. And both KIPP and DSST scored highly on the state’s Student Performance Framework (see chart comparing high schools), despite having more than 90 percent and 70 percent of students qualify for free and reduced lunch, respectively. In other words, demographics do not equal destiny – if we don’t let them. 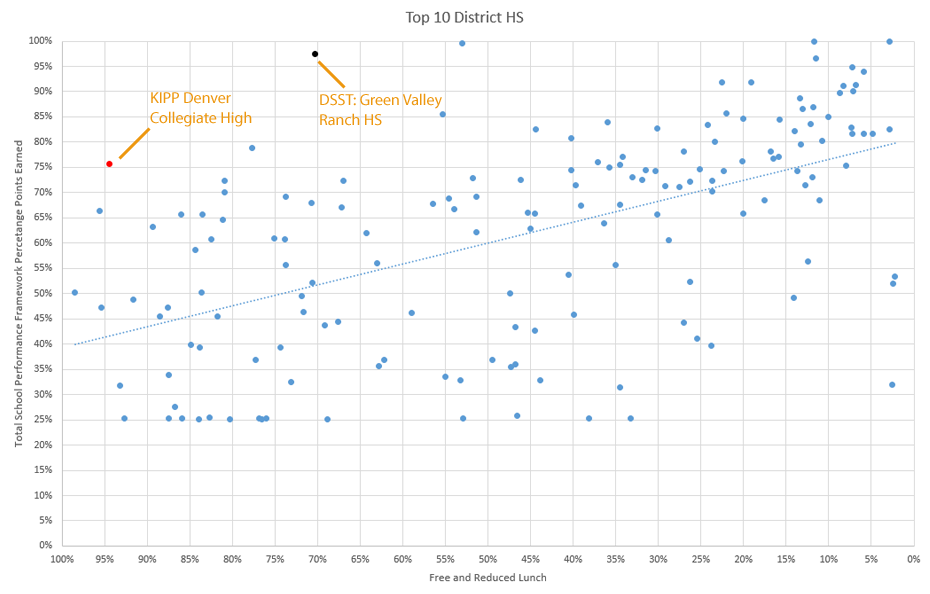 The Stanford data are so comprehensive and far-reaching that it’s hard to decide which tidbits to pick out. But here are a few that caught our attention, along with our takeaways;

So despite the study’s sobering findings, all is not lost. Intentional and concerted efforts to offset these realities can make a measurable difference in fairly short order. Unfortunately, success stories, like the ones mentioned above, seem to be one-offs rather than systemic in nature.

It’s clear from this study that defending the status quo is to defend condemning large swaths of our students to academic and economic inferiority. We believe strongly that giving Colorado families and students access to choice, including innovative, rigorous, and relevant education that includes multiple pathways to higher education and career opportunity, is what our state and nation needs to produce the citizens the 21st century requires. And we will continue to shine a light on the places across Colorado that are closing these gaps. As this comprehensive study shows us, it’s more important than ever that choice and innovation are accessible to all Colorado students and not just those with socio-economic advantages.