Every two years a sample of 4th and 8th graders in every state are given the National Assessment of Education Progress (NAEP) assessment in reading and math, also known as the “nation’s report card.” The NAEP assessment has gained notoriety as the most credible benchmark in student achievement because it is the only test to consistently assess student progress over time.

The 2015 results released at the end of last month broke the historic upward trend that has characterized the NAEP assessment results since its implementation more than 20 years ago.

This year, 4,500 students in Colorado were tested, and while scores are still above the national average, they fell short of what was expected.

Similar outcomes were found in reading. 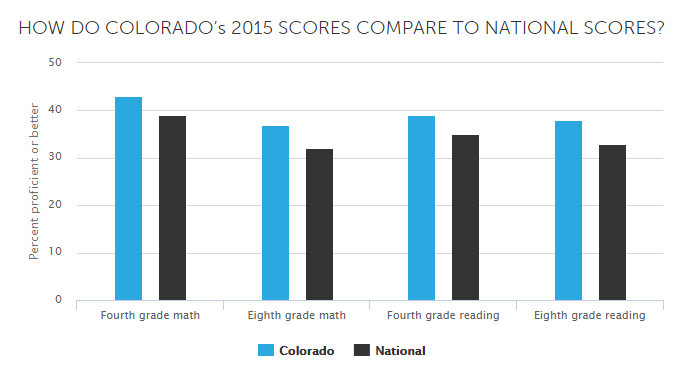 Critics of the test have been quick capitalize on this downturn, blaming falling scores on school choice, accountability, and testing policies. Others are pointing to the adoption of the Common Core State Standards and changes in demographics. While it will take time to unpack all of the data and analyze the results on the deeper level, one thing is clear: one year of lower scores does not constitute a trend. And the long-term data actually shows just the opposite, with Colorado and the nation’s scores increasing consistently over the last 20 years.

While NAEP provides a valuable snap shot of student achievement, it is only one measure representing a small number of Colorado’s students. Results from the PARCC assessment, which Colorado students took for the first time in the 2014-2015 school year, were released just last week. Similar to NAEP, PARCC tests students in mathematics and English. These results paint a slightly different picture of student achievement as they test a much larger percentage of Colorado’s students and are more closely aligned with the Colorado Measures of Academic Success (CMAS), which include the Common Core. For information on how Colorado students performed on the PARCC test, visit our blog post breaking down the results and what it means for our students.